David de la Mano was born in Salamanca in 1975, where he graduated in Fine Arts before focussing on Public Art for his PhD at the University of Valencia.

Relying predominantly on harsh contrasts of black and white, his reductive and increasingly emblematic paintings centre around narrative and symbolic figuration.

David de la Mano is a contemporary artist known for his meticulous brushwork, his knack for large scale, almost systematic use of black and white, and his minimalist human silhouettes.

With his original training in sculpture, he has focused his interest on public art, to which he has naturally and immediately integrated urban art, becoming one of the most important artists in this discipline.

His work is made up of characters taken from great poetry that do not leave anyone indifferent. Through each piece, he works to transcribe his vision of the world around him, in the most personal and symbolic way possible. Between shadow and light, playing with shapes, contours and contrasts, David de la Mano gives birth to a world of perfect balance, where human beings and nature, always intrinsically linked, merge and then stand out, in perpetual motion. In addition, it stands out for its exploration of new spaces, supports and materials such as open or invisible spaces, permanent and ephemeral supports, and diverse materials such as urban furniture, or elements of nature.

The Spanish artist with a very unique universe has nothing more to demonstrate of his virtuosity, and each of his frescoes around the world confirms it. For Mehdi Ben Cheikh, director of Galerie Itinerrance, "David de la Mano's work is as relevant on the street as it is in galleries, and it retains all its power from one place to another".

David de la Mano's painting focuses primarily on the importance of social ties, primarily through the representation of human figures evolving in groups, often facing an obstacle or threat. Take advantage of the evocative power of silhouettes to stimulate the imagination of your viewers. 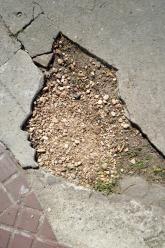 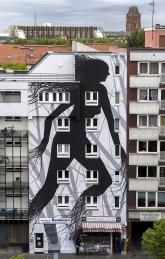 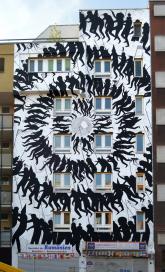