The outer circle and inner space – Peca was born in Argentina and graduated from the University of Fine Arts in the city of La Plata (UNLP). She paints, illustrates and animates films in Barcelona for more than a decade. For a while, she’s dedicating her creative energy exclusively to painting and shows her mystical universe at solo and group shows in many international renown galleries.

With her variety of influences, Peca is mostly guided by her “own inner dimension”, sharing her own dreams, visions, meditations, spiritual life's knowledge and experience ... Her worlds, wonderfully engaging visual narratives, are inhabited by meditators, mystical beings, curious animals, stellar omens, universal phenomena ... all meet in a galactic field of strawberries … while it gently weeps.

Fascinated by The Garden of Delights, the Beatles, Caravaggio, Dadaism, pop culture and comic artists, she combines all this in her mystical creations. 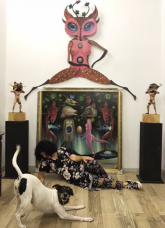 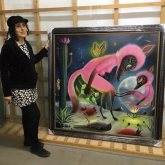 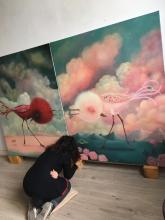 "Peca’s art transports us to a cosmos inhabited by mystical beings who act as our guides and mentors through it’s enigmatic existential terrain. The peaceful anthropomorphic residents of Peca’s universe carry great wisdom and impart their knowledge, when we are willing to look hard enough. Peca herself, is a master at sharing her own life’s knowledge and experience. She skillfully translates the images which appear to her through her dreams and meditations, and turns them into wonderfully engaging visual narratives filled with her dream world’s native language of universal symbols. All that is left, is for us to open our minds and hearts to the magical wonder of it all."

"Her creations are a door to a dreamy, and mystery universe, that you have visited before, perhaps in dreams, or astral travel. With several solo and group behind her, having worked for major publications such as Rolling Stone and with the confidence that comes from believing that bring the art of another life, Peca invites us to a magical world where fantasy repose on fields strawberries. Welcome to the spiritual version of Wonderland."