Victor Castillo is a Chilean painter currently residing in Los Angeles, California. He was born in Santiago, Chile in 1973, the same year that military dictatorship was established in his country. Inspired by the animations, science fiction movies and the illustrations on his family’s record covers, he began drawing obsessively at the age of five. Later he studied at University of Art and Social Sciences (ARCIS) and the Catholic University of Chile. Victor joined an independent experimental art collective in Santiago, creating mixed media sculpture and video installations.

Having moved to Barcelona in 2004, he dedicated himself to painting and established his style with references to comics and graffiti. With the time he adopted aspects of classical painting in his work and Victor began to show his work internationally. His exhibition Explicit Lyrics (Barcelona, 2007) was a critical success with the national newspaper El País publishing a full-page article about his tragicomic vision titled “The Triumph of Pop Surrealism.” In 2010 he moved to Los Angeles, where he resides still.

Victor’s work is included in the traveling museum exhibition Turn the Page: The First Ten Years of High Fructose (USA, 2016–17), and in the Les Enfantes Terribles exhibition at the Lyon Biennale of Contemporary Art (France, 2011); in international art fairs in Santiago, Hong Kong, Istanbul, Mexico City; as well as in numerous newspapers, magazines, and publications. He has created large-scale indoor murals for the Chilean National Museum of Fine Arts (MNBA) in Santiago, Chile; The Gabriela Mistral Cultural Center (GAM) in Santiago de Chile, the Museum of Modern Art Chiloé; the Center for Contemporary Culture Barcelona (CCCB), Spain; the Fabricca Del Vapore in Milan, Italy and the Contemporary Istanbul art fair among other installations.

Victor Castillo tells stories in his paintings. As if it was a contemporary chronicle, his work appropriates the narrative logic of illustrations for children’s stories, and the aesthetics of classic animations, to present us with allegories about cruelty, fear, rebellion, greed, indoctrination, violence, and other abuses of power that the artist sees as imposed worldwide. His colorful work has also been described as political poetry coming from the Latin American experience. 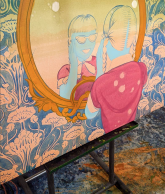 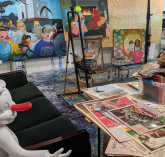 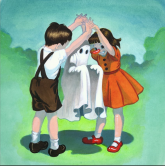 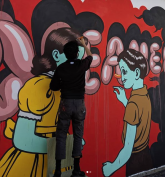 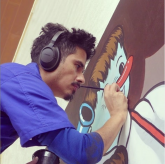