Phil Ashcroft is a painter and graphic artist based in London. His formative years in the early 1990's as a student of illustration were spent first at Harrow College of Art, then at St Martins College of Art and Design, a time which coincided with the emergence of widespread digital communication and image manipulation, a direct influence on his artistic practice.

Since 2002, when he was invited to paint in Graffiti Meets Windows 1 in Osaka with the Scrawl Collective, he has collaborated on live-painting projects in galleries and alternative spaces including Tate Modern’s Turbine Hall in 2010 as part of No Soul for Sale, an exhibition celebrating Tate Modern’s 10th anniversary.

His monograph Solar System Parameters, containing work from 2005-2013 and an essay by Paul Hobson, director Modern Art Oxford, was published by Gamma Proforma in 2013. 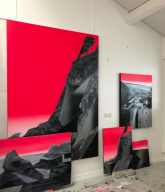 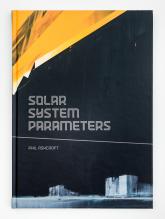 “Phil Ashcroft’s specific form of gestural, emotive abstraction combines flattened out 1980s style art deco and graffiti influences with references to American abstraction which often threaten to overwhelm the upper sections of his canvases. But it is an overtly Post-Modern type of abstraction, one that appears to forefronts process and gesture but is in fact computer generated translations of gestural painting reproduced as painting.

In other paintings, the work is entirely abstract but it is as if he has cropped or zoomed into the image, suggesting digital manipulations re-presenting or editing Modernist formats. This is further reinforced by the references to vector graphics and geometrical primitives in Ashcroft’s work, graphics based on mathematical expressions which are used to communicate non-subjective, procedural routes into abstraction at odds with the historical overtly-subjective precedents of Abstract Expressionism.”