In Between Space, Time and a Pattern of Chaos

Seven artists – as dissimilar in their idiosyncratic individual grasps as they are bound by their relations to a diversity of intersecting spheres, rationales and aesthesias in the multidimensional matrix of alternative contemporary currents – meet in between space, time and a pattern of chaos.

A cohesion connecting the work of Julia Benz, Phil Ashcroft, Aris, Will Barras, O.Two, David De La Mano and Alberto De Blobs is less constructed by a common program than based on shared sensibilities and affiliations. Although we can safely assume that most of the artists shown have worked in the urban surrounding without permission at one point or another, that alone is not it. Urban Art with its blurry border zones constitutes an artistic – of course urban – jungle hideout where a communality is found which is most analogous to Wittgenstein's idea of family resemblance. Not everyone shares one particular denominator, but all exhibit one or another trait belonging to a shared still broader spectrum.

Lines and grids of one dimension may skew and bend toward another, loose cannon painterliness may mingle with delicately contrived graphics, inmidst a thousand plataus of figuration looms a loophole toward full fledged abstraction – or the other way 'round. An inevitable dialogue with graffiti-influenced contemporary muralism meets references to print-making-technique and aesthetics with Ben Day dots, shapes and fields. Forms resembling papercuts convey a distant echo of Matisse, while their significance is equally informed by a wielding of wallpaint honed during numerous assaults on structures in public space – authorized or not. Hermetic studio discipline suddenly engages in unlikely conversation with accessible glimpses of cinematic storyboard scenery. The stardust of spraypaint has its sprinkling blur interplay with the harsh contrasts of mask and stencil when the peculiarities of the tool are subject to investigation.

After all, there maybe still is that one content-wise common quality, connecting these artists on a more subtle level. Floating transparencies of layering or allusions to the jagged structures of urban dystopian landscapes, all the way to loudly coloured accumulations of impulsive gestures of paint – no matter where these artists wander about, there seems to always be an urge for exploration of depth. And where will depth ever be encountered if not In Between Space, Time and a Pattern of Chaos? 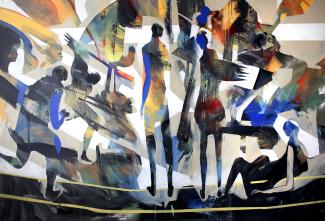 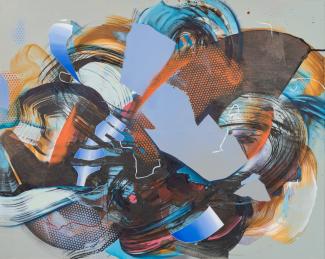 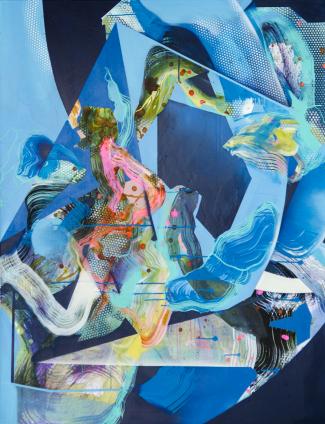 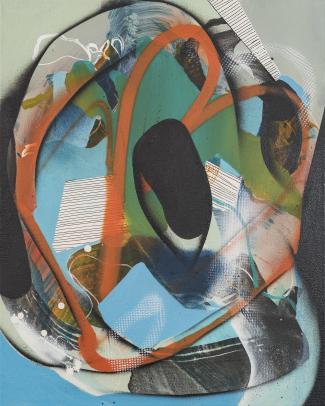 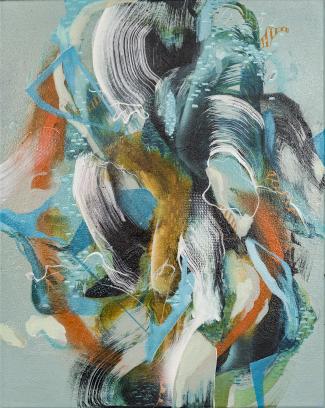 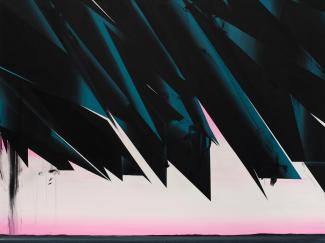 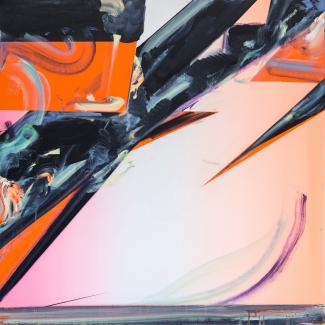 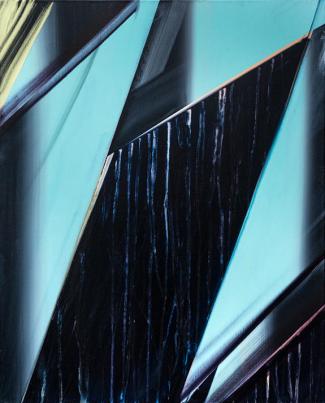 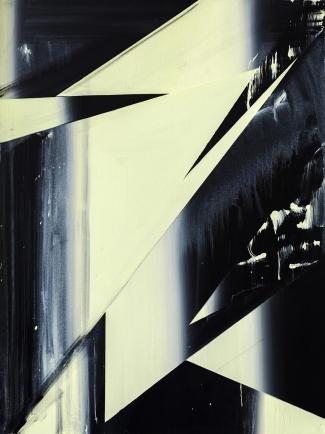 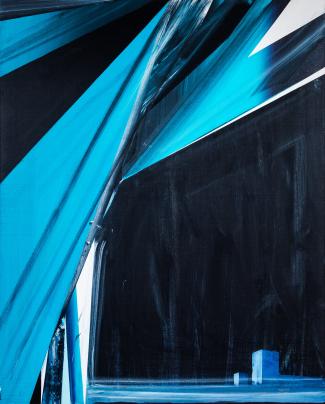 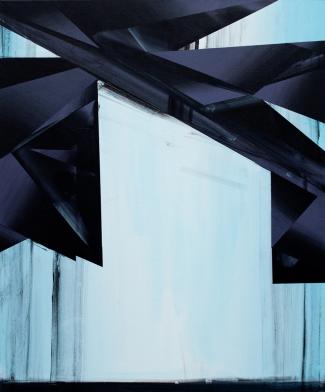 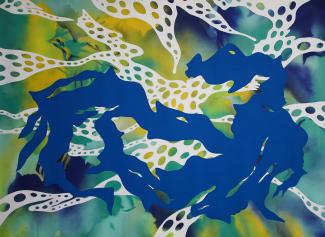 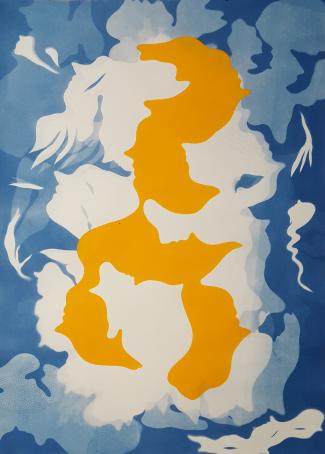 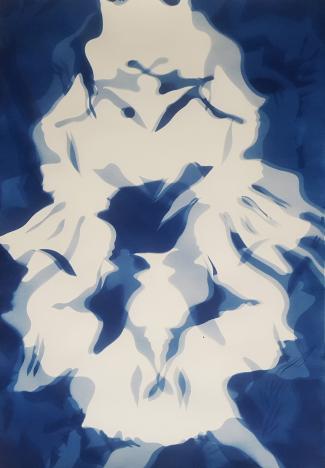 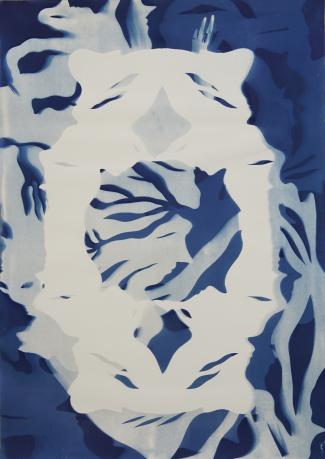 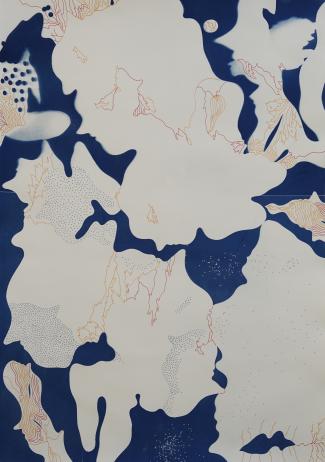 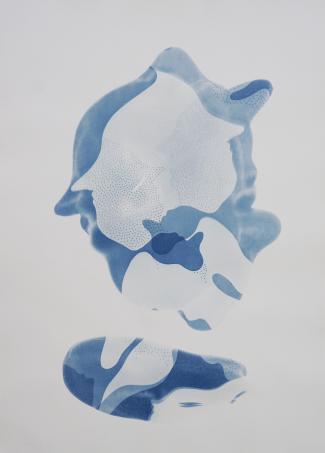 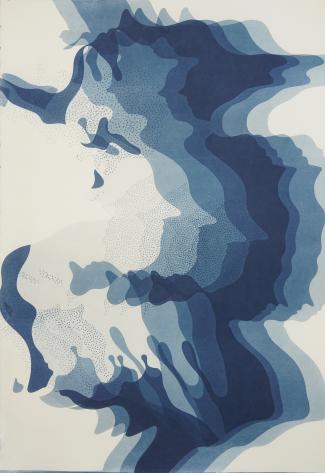 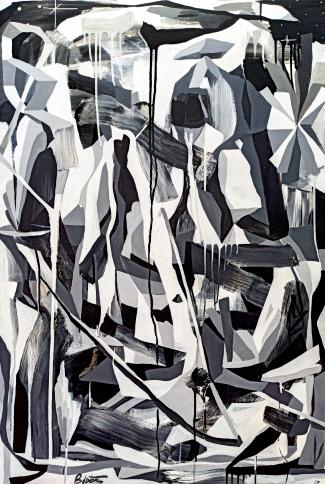 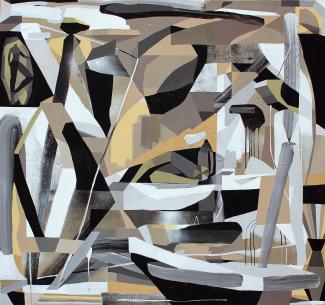 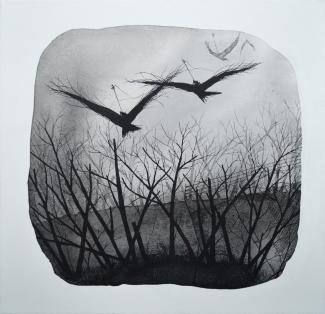 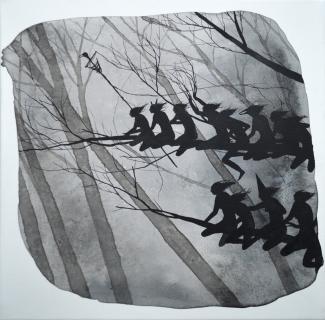 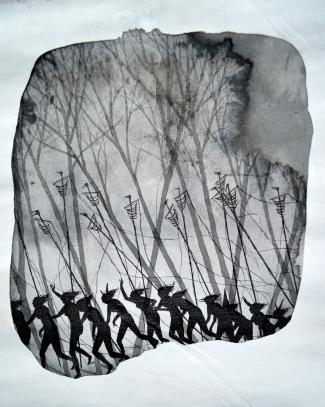 Julia Benz, born in 1988, is a German painter and mural artist. Benz studied painting in Düsseldorf and Berlin where she continues to live and work. Julia Benz has partaken in numerous urban muralism projects and collaborated with central figures of the street art movement. Her studio work consequently incorporates traces of urban canvas techniques and sensibilities, and thus has been exhibited in galleries affiliated to the urban art scene and in international contemporary art contexts alike. While many of her contemporaries aim to transgress toward the traditions of modern painting from an urban art background, Benz departs in the opposite direction.
More information

Aris, real name and age undisclosed, resides in Tuscany, Central Italy. Since his early 1990's beginnings in the writing culture, he has incessantly risen to underground prominence. Without a doubt, Aris is one of the most distinguished and important artists of a new breed of unauthorized public painting and graffiti on trains.

Will Barras, born in 1973, is a British animation designer and painter. While studying graphic design in the 1990's, Barras became aware and subsequently part of the flourishing Bristol street-art scene and co-founded the influential Scrawl collective.

O.Two – real name James Carey – born in 1979, lives and works in London. A member of Wizard Kings artist collective, Carey takes his graffiti heritage as a starting point of progressive explorations. Teenage delinquency is transformed and refined into a Post Graffiti texture of abstract gestures, but never disclaimed.

David de la Mano was born in Salamanca in 1975, where he graduated in Fine Arts before focussing on Public Art for his PhD at the University of Valencia.

Alberto de Blobs, born in 1982 started his career as a painter at the young age of 12, writing graffiti in Barcelona. From wild style letter painting, his style gradually evolved towards today's elaborate mixture of figurative and free form abstraction. With its open muralist approach, de Blobs' highly illustrative visual language combines references to his subcultural roots and art historical predecessors alike and with ease. Merging all types of influences, genres and styles, Blobs forged a brilliant outlook on creativity which is presented through his search for new experiences. This newly-made reality escapes all conventions and breaks free from links to any particular aesthetic trend.
More information