Will Barras, born in 1973, is a British animation designer and painter. While studying graphic design in the 1990's, Barras became aware and subsequently part of the flourishing Bristol street-art scene and co-founded the influential Scrawl collective. Now leading a London based double life between occupations as a highly decorated animation director and studio artist.

Barras' paintings are characterised by a distinctive mix of dynamic shape composition and pulp story film still-evoking figuration. The urban weapon of spray paint is in the mix, when wet acrylics produce aquarelle effects as a basic layer for an inventive use of negative space. 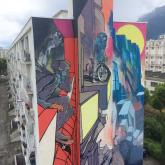 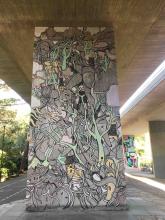 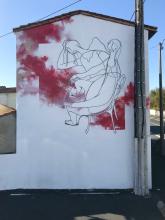 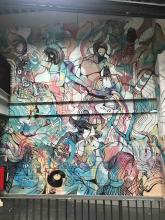 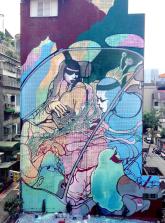 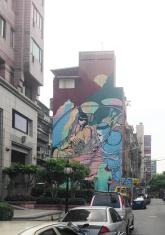 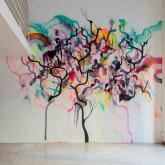 "The presence of the absence – Will Barras, considerate him as an urban legend, is a known artist, illustrator, and animation director who lives and creates in London.

After studying graphic design in the 90's, he was one of a new crop of young artists working in the renowned and respected street-art scene of Bristol. This led Will to found the Scrawl Collective, alongside Steff Plaetz and Mr. Jago, and to appear as one of its best representatives in the Scrawl book, a seminal book published in 1999 documenting a new movement in street art.

As such, Barras has to travel extensively, live-painting and exhibiting pieces throughout Europe, the U.S. and Asia, while continually evolving his style and technique. A recognized artistic style with his unique narrative-driven compositions and line work, remarkable brush strokes, and the use of a colorful palette gives an impression of weighted energy."

“… Recognition as an artist’s artist is a statement of high respect from your peers. It means you inspire people who do what you do. That’s a big deal if you’re a plumber, a professor, a painter, whatever. It means you influence professionals in your industry and the kids who are exploring it as a possible career. In the years I traveled with Will, I spoke with dozens upon dozens of artists who knew him or his work, there was a constant admiration for both his nonchalant, happy go lucky demeanor and the perceived ease with which he made compelling work as well as the work itself. Without fail, other artists had a deep appreciation for his approach, process and output: An artist’s artist…”

“… But if being an artist’s artist is a question of passion and personality, it’s also a question of style and substance. Most artists, be they writers, painters, sculptors, and so on, need a long time to find what can be referred to as their mature or proper voice- an identifiable way of speaking that makes a person think specifically about them- an authentic style. Will seemed to find his without looking. While his technique and approach to material have evolved, his personal language remains present. In 20 years of producing work, you can see his boyhood face clearly in the portrait he leaves of himself as a man.”